Top 8 reasons why motorbikes are better to own than cars

Why motorbikes are better to own than cars

Pound for pound, motorbikes are much better value than cars. 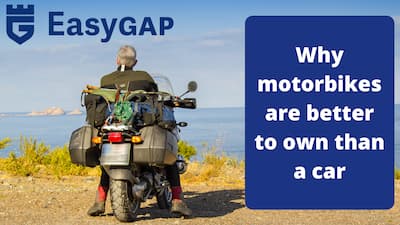 You can get an engaging, sporty motorbike for less than you would pay for a bog-standard city-type car. The fun comes with a much lower price tag with a motorbike.

You won't need to struggle for parking.

In the city or downtown area, if you live there, motorcycles can be parked almost anywhere - they are much smaller than cars, so that most spaces will do.

Motorcycles come with lots of safety features that are often not found in cars.

Most motorcycles can be equipped with a dual-purpose motorcycle helmet and goggles that protect the rider's head, face and eyes from both direct impacts as well as objects flying around in case of an accident.

A motorcycle can be much safer than a car in the rain.

This is thanks to its lightweight and low centre of gravity. It will be able to break sooner and more effectively than a car in wet weather.

Motorcycles are deemed to be more fuel-efficient.

Compared with cars, motorbikes have a range of factors because of the factors that increase their true-fuel efficiency by around 30% or 40%.

In addition, most motorcycles nowadays run on alternative fuels such as electricity and natural gas, which will also save you money. Even if you stick to regular gasoline, you will still save money because motorcycles require less fuel to operate.

Thinking about buying a motorbike? Get a quote for GAP Insurance HERE from EasyGap.co.uk

Motorcycles are faster than cars.

It's true. But it doesn't mean that speed is all they're about; on the contrary, what makes them more advantageous over cars is their flexibility and manoeuvrability. If you want a sports car, you can't drive comfortably in the city, but if you want a bike that takes you across town with speed and manoeuvrability, then you've got yourself a motorcycle!

Motorbikes are cooler to own.

Let's face it; cars will never be as cool as motorcycles. Well, at least you would have to spend an awful lot more to own a fantastic car that will turn heads. There's no thrill like riding on two wheels and feeling the wind in your hair, under your helmet, of course.

You'll have an easier time driving through traffic in the city.

Motorcycles can fit into tight spaces, provide superior fuel economy at a competitive price. They're cheaper to insure than cars because of the factors listed above.

You don't waste hours sitting in traffic and gas stations, and they showcase accurate discretion for your personality. You can't get more than that.

That's why motorbikes are better to own than cars. There's a reason why many of us choose them over the traditional family-friendly car! However, if you decide to go with a motorcycle instead of a car, be sure to equip yourself with riding gear and protective clothing as an added precaution.

Then, once you are properly kitted out, enjoy the ride!